The Journey Begins in Real Time... 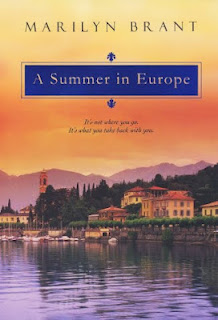 I was reminded by an online friend (Hi, Catherine! *waving*) yesterday that the story that takes place within A Summer in Europe begins on June 26th, which is the main character's 30th birthday. I'd nearly forgotten this detail -- amidst all of the craziness and general chaos of my day-to-day life -- but then I checked the pages and not only remembered that the dates aligned, but so do the days of the week, since I used the 2012 calendar when I drafted the novel.

It's a funny thing, getting to begin a journey with my characters now, in real time, that I've already written for them in anticipation of this summer... ;)

Anyway, I have a few fun photos to share of events from this month. A panel shot from Printers Row (with Karen Doornebos, Elisabeth Lenckos, Abigail Reynolds, me, Regena Bryant and C. Allyn Pierson), and a picture of Karen and me with William Deresiewicz, author of A JANE AUSTEN EDUCATION during his signing. 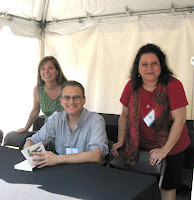 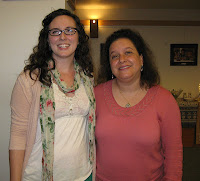 I've also got a few snapshots of my travel program at the Waukegan Public Library, which was tons of fun!! Such a great group of patrons, friends and librarians there that night. To the right, I'm with the lovely programs librarian, Sara. Have a fabulous week, everyone! Here are some other pictures from the meal, talk and signing: 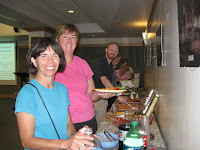 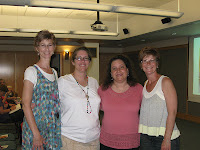 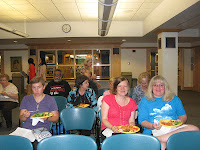 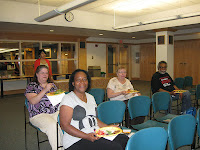 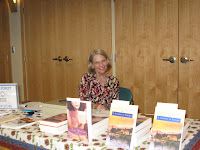 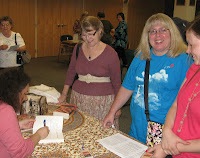 I had a wonderful time at the Printers Row Lit Fest in Chicago this weekend (there are a few pictures up on Facebook already :), and I'm really excited about tonight's program, too, at the Waukegan Public Library! I'm giving a talk on Traveling in Europe -- complete with an Italian meal that the programs librarian and I are putting together (so much food!), a slideshow of fabulous sites across the pond and how visiting them influenced the writing of A Summer in Europe and a booksigning, too. So, if you're anywhere near the area and want to join in the fun tonight, please check out the details HERE! It's free and open to the public. I'll be in the Bradbury Room (yes, the incredible Ray Bradbury was once a resident...) from 5:30 - 7:30pm.

Also, a little FYI, According to Jane is the featured book this week on fellow Austen Author Sally Smith O'Rourke's blog Austenticity! Posted there is the longest free excerpt that's ever been online for the book (the prologue + the first 3 chapters) so, if you haven't read the story, you can take a peek at the beginning HERE!

Hope you're all having a fabulous start to the week ;-).
Posted by Marilyn Brant at 12:26 PM 5 comments:

A Summer in Europe...the Vlog!

Ohhhh, my God, it's JUNE! That's when school's out! It ends only a few days from now, and I'm NOT READY for that!! (Can you hear me panicking in Chicago?)

However, aside from my complete lack of preparedness for summer vacation, the week is going very well. I had the honor of being the blog guest of the lovely Jakki Leatherberry this week, who wrote a wonderful review of A Summer in Europe, did an interview with me (there's a book giveaway attached to that, btw!) and, as of today, has up a special vlog that she filmed about the book. I loved it so much, I just had to share it!!


I also had an interesting experience in the past week that, I'll admit, surprised me a little. I came down with another cold (that's not the surprising thing -- I need to get more sleep/take more Vitamin C/etc.), but I was up really late because I couldn't breathe and I thought it would be helpful if I at least did some work on my current manuscript. Well, Internet "book research" being what it is, I didn't exactly stay on task for as long as I should have. I veered...and somehow found myself at the CW Network site watching the pilot episode of "The Vampire Diaries."

This part is surprising because I really am not so big into the whole neck-biting, blood-sucking vampire thing, and I'd all but vowed not to watch it and yet, yet...the character that Ian Somerhalder (formerly Boone on "LOST") plays on the show, the remarkably strong cast as an ensemble, the conflict-laden brotherly relationship, the love triangle, the excellent writing and the unexpected humor (most of which originates with Somerhalder's bad- 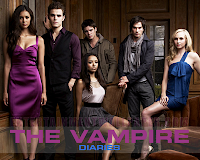 boy vampire character, Damon Salvatore) totally won me over. Even more surprising, I ended up renting the Season One DVDs and have been devouring them like a vamp who was turned in 1864 and...oh, never mind.

Have any of you ever had that happen? You were so sure a show/film/book wasn't "right for you," but then you gave it a chance and it completely captivated you? Makes me wonder -- what TV series should I try next? (It does not need to have supernatural creatures in it to interest me, btw. ;) I'd love to hear about your faves, and I'm open to suggestions!!

Wishing you a great weekend and a very happy June, everyone!
Posted by Marilyn Brant at 8:16 AM 11 comments: