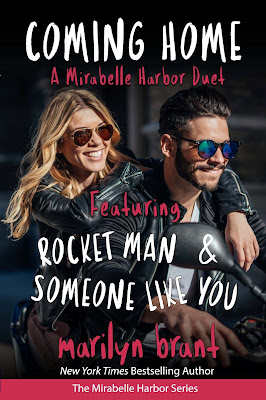 ADVANCED PRAISE:
“I love coming home to Mirabelle Harbor! This duet is my favorite of the whole series, truly the best for last. I have enjoyed my time in this cute little seaside cove and I am a little sad it has come to an end. I adore everyone in town, including Rick and Abby from Rocket Man but Chandler and Jaleina's story was just so different than all the others. I feel Marilyn outdid herself in Someone Like You. She was able to capture the passion of Jaleina's culture and the determination of a man who knew what his heart always wanted. Sweet and sexy, a romance so passionate, it had me blushing!” ~Margie’s Must Reads

COMING HOME: A Mirabelle Harbor Duet featuring Rocket Man & Someone Like You will be out soon! The ebooks are available for pre-order on Amazon, B&N, iBooks, and Kobo—they’ll be released September 10th—and the paperbacks are out right now: Here!!
This is the final chapter in the Mirabelle Harbor series, and it's a thrill to know that it's ready for you all to read :). I truly hope you'll enjoy this last installment!!
Check out my website for excerpts from each novella and here are the book details below:
There’s double the trouble in this romantic story pairing when ex-lovers, Abby Solinski and Chandler Michaelsen, both return to their hometown of Mirabelle Harbor, only to find that the happily ever after they thought they’d given up may, in fact, still be a possibility…just not with the person they’d expected!

ROCKET MAN
Abby had a crush on “Rocket Rick” Zimmerman way back in high school, but he was her brother’s best friend and graduated a couple of years ahead of her, leaving town for an international life of top-secret, science-nerd intrigue. She didn’t understand a fraction of what he did professionally, and he wasn’t allowed to tell her anyway. Abby, meanwhile, meandered around the country with her then-boyfriend, Chandler, eventually winding up alone and working at a couple of part-time jobs in Florida. She’d resigned herself to being single forever and living on the sunny Gulf Coast, a thousand miles away from her Midwestern origins.

But when her parents need her help back in Mirabelle Harbor, she flies home for a week and runs into Rick again, who’s back in the Chicago area for a big physics convention. Immediately, she’s caught up in a surprising game of “Booster Ignition and Liftoff,” where the object seems to be an answer to this scientific question: Just how fast can things heat up between them without somebody getting burned?

SOMEONE LIKE YOU
As for Chandler, he had no intention whatsoever of coming back to Mirabelle Harbor. When he and Abby broke up, he headed north on his motorcycle from Sarasota to Atlanta, and a life on the road was how he wanted to roll. But then his twin brother, Chance, goes and gets himself engaged, and the groom insists that Chandler needs to be the best man. Fine. He’ll drive back for a few days, for the sake of his twin, but no one had better expect him to stay in town. Of course, that’s before he knows his dream woman—beautiful bookstore owner, Jaleina Longoria—is going to be at the wedding.

Jaleina is not only eight and a half years his senior, she’s also the ex-fiancée of his eldest brother, who’d broken up with her to marry someone else years earlier. That never stopped Chandler from considering Jaleina to be his Ultimate Fantasy. Getting her to stop thinking of him as the restless teen boy he’d once been, however, is going to prove quite a challenge. Especially since the restlessness is still there, even though he’s now a very passionate—and very determined—full-grown man.

Sometimes what you think you’re returning to isn’t what you’d really left behind. COMING HOME, a pair of Mirabelle Harbor stories.

**NOTE: All of the romances in the Mirabelle Harbor series take place over roughly a two-year time frame, and every book listed below can be read as a standalone story. Details on each book and links to excerpts & extras can be found on my website HERE. 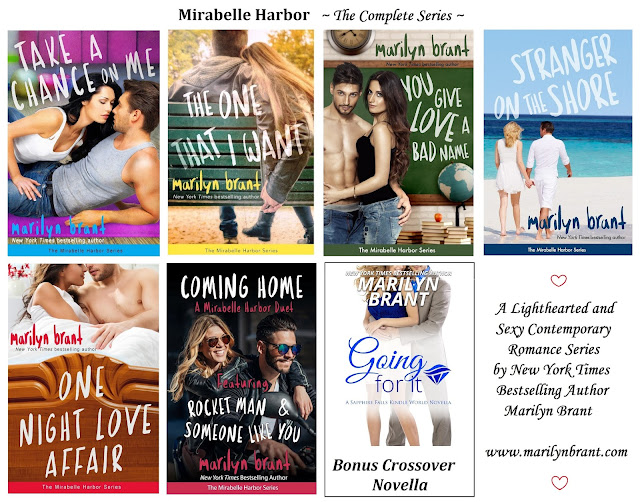 Posted by Marilyn Brant at 7:36 PM No comments: