It was such a thrill to watch the Opening Ceremonies for the London 2012 Summer Olympics last night.

Yes, yes, there were long stretches where there was just lots of talking and walking (my son informed me he was "bored" more than once during the Parade of Nations), but I loved that ten-minute sequence at the very beginning that showed famous spots around the United Kingdom...and who wouldn't get a kick out of that fun scene with Queen Elizabeth II (aka Bond Girl) and Daniel Craig (aka 007) where they jumped out of the helicopter?! I couldn't stop smiling.

When we went to the England at the end of March, one of our major sightseeing visits was the British Museum. My husband and I had been there before, but we wanted our son to see cool historical things like the Rosetta Stone, too, so he wouldn't think London was only known for the Tube and the Cadbury bars...

As a bonus, we had a chance to get a close-up view of the newly minted Olympic gold medals for the London Games, which were on display in the museum, and I thought this week would be the perfect time to share them. Gorgeous, yes? I'm already anticipating the fun of watching the men's and women's gymastics competitions, some of the swimming and diving events and a taster platter of other sports, like archery, volleyball and fencing. What about you?? Do you watch? Which events are your favorites?

And, in an extra bit of exciting news, I was delighted to learn a couple of weeks ago that my ebook romance, Double Dipping, was named a 2012 contemporary novel finalist in the International Digital Awards! There may not have been any gold medals bestowed on the finalists or winners, but it was a tremendous honor all the same.

Wishing you all a fabulous week!!
Posted by Marilyn Brant at 1:14 PM 7 comments: 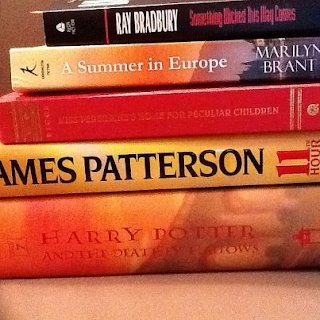 As some of you already know (see Magical Musings post on the subject), I've always considered this to be a lucky day...and I hope that proves true for you, too!

This awesome book photo on the left comes courtesy of the wonderful Jill Thomas, who sent me a snapshot of her vacation reading stack. So honored to be in this literary company!!

This week has been a busy one...half the summer has flitted by and I'm only just beginning to believe it's actually BBQ season. Summertime events -- both online and off -- have been happening so fast that I haven't had the chance to highlight them, but I did want to tell you all about a few:

Last night, I met the lovely Elizabeth Hoyt, Jade Lee and Allie Pleiter at the Fremont Public Library, where we took part in a romance panel and got to meet some really nice patrons. We're doing it again tomorrow -- Saturday, July 14th from 2pm - 3:30pm -- at the Warren-Newport Public Library in Gurnee, IL. So, if you're in the area (or up for a road trip!), please join us. There will be dessert and a drawing for a bag of free books!

On the subject of book giveaways...I'm a guest this week at Darcyholic Diversions and am giving away two copies of my digital romantic comedy, On Any Given Sundae. The contest runs until the beginning of August, so it's not too late to comment and be entered!