Being on the Set of "Chicago Fire" as an Extra! 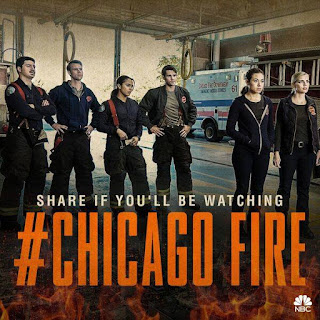 I shared this story on Facebook earlier today, but I wanted to post it here as well because it was just such fun! :)
The city of Chicago is home to some fabulous TV shows, including NBC's "Chicago Fire." A couple of weeks ago, I came upon their casting alert page for extras... Now, I've never done anything like this -- it's been 25 years since I've even been onstage in a community theater production, LOL -- but I really enjoyed this show and the others in set in the same world ("Chicago P.D." & "Chicago Med") and thought it was incredibly cool that they included so many locals as extras.
So, when there was a casting call at the end of November for a group scene with people of various ages and backgrounds, I submitted my picture and the required info. It was a totally spontaneous thing, and I knew there would be a lot of applicants. I wasn't at all surprised when the film date came & went and I didn't hear back from them... I was, however, utterly stunned this week when one of the casting people left a voice mail for me and asked if I was available to play a "paralegal" extra during their shoot in Chicago yesterday. I had to replay the message 3x before I believed it!! Of course I said YES!!
It was such a marvelous experience, and everyone involved -- from the actors to crew members to other extras -- were really nice and very professional. In the snapshot below, Mariana (far left), Sharella, Nancy, and I bonded over being lawyers/paralegals for the day. A couple of them had been extras before, so it was great chatting with them about the shows they'd worked on, as well as books and real-life stuff. For me, the realities of being on a film set, even in a teeny tiny capacity, were just fascinating. You all know how much I love TV. And all forms of storytelling. And actors!! So, truly, it was a feast of delights getting to see how a couple of short scenes were done from beginning to end. 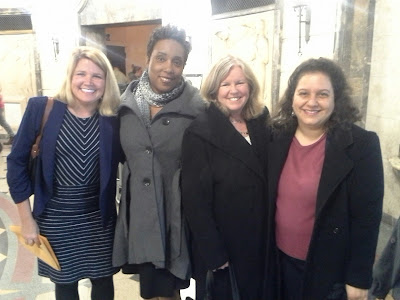 A few observations: There was a lot of standing around and waiting, but I knew to expect that. There was quite a bit of repetition, too, as far as the shooting of each scene (for blocking, for rehearsals, for filming multiple takes and camera angles), but I expected that as well. What I hadn't expected were certain details I'd never thought to consider -- like needing to attach something to the soles of our shoes to muffle the sound they make on the tile. (In one scene, several of us are walking down a hallway, and all of the women's heels were clicking too loudly!) In the other scene, I was sitting on a bench in that same hallway with a male extra who was playing a lawyer, and he was explaining his notes to me -- silently. We were told that even whispering could get picked up by the mic, so we should only mouth the words of our conversation. And there was a crew member running around with a dozen rolls of masking tape in different colors. I saw him use a couple of them to mark spots on the tile for the main actors. And the sweetest lady with hair-styling products, who was determined to get my curly hair to stop frizzing. (A task I'd failed at for decades, by the way. So, she was pretty heroic, in my book!)
Anyway, I have no idea if I'll actually end up onscreen after the final edits are in...and if I am, I'll most likely be a passing blur with slightly tamed hair, LOL, but I had a blast!! I was told the episode we were shooting was for Season 4, Episode 12. The fall finale of "Chicago Fire" will be this coming Tuesday, December 8th, and that will be Episode 9. So, the one we were working on yesterday should air sometime in the New Year. I'll keep you posted!!
If you could be cast as an extra on any TV show currently on right now, which would it be?!
Posted by Marilyn Brant at 11:50 PM No comments: