The Vernal Equinox came and went two days ago so, yes, it's officially spring. 😊🌷🌺🌸🌹🌼🌿
But usually -- in Northern Illinois -- that doesn't mean a whole lot. We've had snow days during this week in past years. I distinctly remember a very lengthy, no-electricity-in-the-house-for-days ice storm in Southern Wisconsin during one "spring break," so my expectations for warm weather in late March have always been fairly low. Until this year. This week we've had a series of days with temps in the 80s (!!!) -- it's so disconcerting! We're Midwesterners, for goodness sake, and it feels like the dog days of summer out there. I'm finding myself tempted to turn on the sprinkler in the backyard and then jump around in it...and, at odd points during the afternoon, I've caught myself wondering, "Where the hell is that ice-cream truck?" So, this is pretty unusual. Not that I'm complaining. I'll take the July-like heat to January-esque hailstorms any day...but I do love SPRING weather. I'm missing that a bit right now.
Anyway, no matter what the temps outside, it's spring break for my son next week, so I'll be trying to be an attentive mom and will be offline more often than is typical for me. (Someone is seriously going to have to drag me away from Pinterest...LOL.) What are you all looking forward to doing in the next week or two? Do you plant flowers? Take care of some spring cleaning? Go anywhere special? Regardless, may the days ahead bring you that wonderful springtime sense of renewal!
Posted by Marilyn Brant at 1:34 PM 6 comments:

Eating Our Way Through Europe 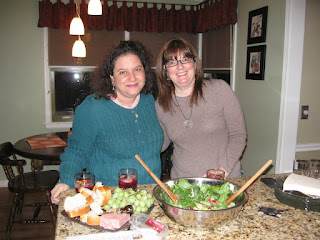 So, I promised book club photos, and here they are! I know I've said this before, but the sheer awesomeness of the book-club experience has been one of those surprising delights of being a novelist. I'd never been a member of a book club prior to publishing According to Jane, never so much as attended a meeting -- although I'd heard about them and had friends who were in them. However, after going to my first one and finding out how incredibly fun it was to talk about novels (mine or someone else's) with such bright, charming women, I became a fan for life. And that was even before I realized just how many delicious foods we'd be eating every time! 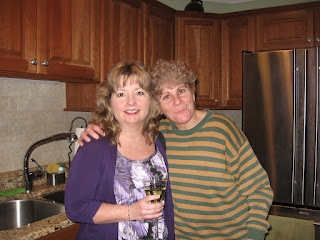 Chris and I above were holding court over the extremely healthy side of the kitchen (gorgeous salad! fruit and cheese plate!), and Marty and Allison, to the right, were getting out the wine and the sangria (!!) while the final touches were being added to some of the other dishes. For the book discussion of A Summer in Europe, it was decided by the president (Allison) and the member who chose the novel (Lisa) that everyone attending should bring/make a dish from somewhere in Europe and, if they had pictures of one of their personal European trips, to bring those along, too. 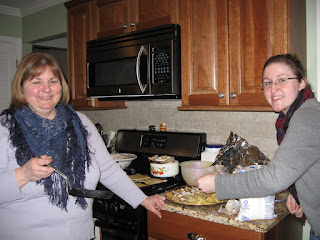 Well, Lisa and her daughter Megan (pictured left), who had both studied abroad in Salzburg, Austria -- a couple of decades apart -- had some beautiful photos of their respective trips and jointly made an amazingly yummy and oh-so-buttery kind of Austrian crepe-like pancake (I should have asked them to write the name down because it was in German and I couldn't pronounce it to save my life, but, boy, was it ever delicious!!) and they served it with warm jam on top. SO GOOD. 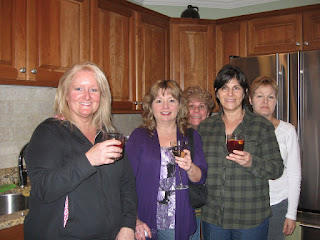 Meanwhile, the rest of the gang arrived (pictured with their heart-healthy wine and sangria glasses: Marcie, Marty, Allison, Claudia and Dori) and, between them, brought apple strudel, spinach quiche, spaghetti squash with Italian sauce, pesto pasta, hazelnut-chocolate pie, marzipan/almond cookies...and more! No doubt about it, we had a fabulous feast.
As for me? Well, you won't be shocked to learn that I brought six flavors of gelato :). The limoncello, the chocolate and the salted caramel were declared the favorites... Today, I'm blogging on Magical Musings about that feeling of luck (with or without any actual good fortune) and wishing everyone reading this -- whether or not you're Irish, whether or not you'll willingly eat corned beef and cabbage (I'll stick with soda bread and Shamrock Shakes, thank you!) -- a very Happy St. Patrick's Day tomorrow!! Is anyone doing anything special to celebrate?
Posted by Marilyn Brant at 11:01 AM 6 comments: 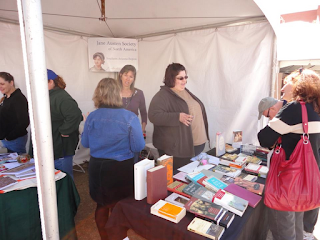 I'm not entirely sure where the first 12 days of March have gone... All I know is that I've been racing through them in a clearly less-than-successful attempt to get done everything I need to do before spring break hits. However, amidst all of the work, there have been some bright spots, and I wanted to pop in and share a few of those.

First of all, I'm blogging in 3 places this week. Today, I'm at Austen Authors giving a retrospective on my long journey to writing According to Jane and the undeniable timelessness of Miss Austen. Tomorrow, I'll be talking about my love of romance during Maggie Marr's "Spring Into Romance" Celebration. And Friday, in preparation for St. Patrick's Day, I'll be talking about "feeling lucky" at Magical Musings. Hope you'll be able to join me for some of these!

As for the picture above, this one is courtesy of the wonderful Pamela Cayne, who was visiting the Tucson Festival of Books this past weekend and saw my "Jane" book at the JASNA booth! I'm still so excited by that!! Thanks so much, Pam ;).

This weekend, I didn't get to fly to Tucson, but I did get to see my first professional hockey game. The Chicago Blackhawks vs. the L.A. Kings were at the United Center last night and, wow, was it an exciting game! Tied at 2 - 2 after the 3rd period, we had five minutes of overtime and then a shootout (!!) before the Kings scored a goal and, thus, won. My son, whose primary ambition in life has been to get to run down the stairs at a live game and bang on the glass, got to do just that yesterday, and I got to see my favorite player (Patrick Sharp, #10, isn't he cute?!) check someone right in front of us. My husband found both of our reactions to be rather amusing.

And last -- but far from least -- I enjoyed a fantabulous visit with a book club I love on Friday night. We talked about A Summer in Europe, and everyone there brought some food to share from one of the places on the European tour. Later this week, I'll post some pictures!

Hope everything is going well with all of you. What have you been doing in March so far??
Posted by Marilyn Brant at 10:36 AM 12 comments: