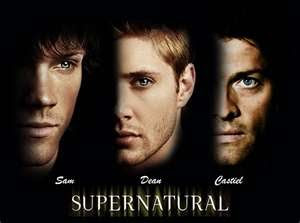 Not to be too blunt about it but...what the hell were you thinking?!

In good faith, thousands and thousands of viewers waited for TWO MONTHS while Supernatural was on hiatus. That was a long time to patiently wonder if Sam Winchester's soul could be restored without destroying him. That was an even longer time not to see Dean Winchester's black-leather-jacket-wearing torso and smoldering and/or smirking facial expressions. Yet, most of us did not whine on message boards or complain openly on blogs or do other such things that would be proof of our geekdom and over-obsessiveness because, hey, we're adults. We can wait and look forward to -- with great anticipation -- getting to see the climactic last few months of the final season.

We were told January 28th was the return date. We believed you. We turned on our televisions Friday night at 8pm, gleefully awaiting the next battle between angels and demons...the next road trip in the black '67 Chevy Impala with classic metal rock blaring...the next possible occasion for one of the Winchester brothers to take his shirt off...and, instead, we got: a Nikita rerun.

Now, I understand the desire to promote a new show. I understand that it's difficult to turn viewers on to something that's debuting this season rather than see them reach reflexively for an old favorite that's been on for SIX seasons (of which I have not yet missed an episode) and is now winding down. In the writing world, though, this would be an unforgiveable bait and switch. Imagine thinking you were downloading the latest New York Times bestselling thriller onto your Kindle or Nook and, instead, you got the debut suspense release of a newbie. Does that mean the newbie's book is bad and/or not worth reading? NO. It is not, however, what you thought you were getting and what you'd planned to invest your time in. And, what's worse, it smacks of Big Brother manipulation in the "I know what you need better than you do" vein.

For the record, I kinda hate that. I don't forgive you for doing this, CW, because it was premeditated trickery. I won't go so far as to rant about how you have no respect for your fans or, more personally, about how you deprived me of an anticipated night of fun watching Castiel say absurdly delightful one-liners or make out with hapless mortal women in imitation of "adult" movies viewed in a motel room (taking a deep breath here), but your ploy backfired big time. I will not be watching Nikita just because you want me to -- no offense to the writers or the cast -- and to add an Austenesque exclamation of horror to this grievous affair, "I am most seriously displeased."

p.s. I understand your Smallville fans share my sentiment as well...

Dear Everyone Else,
Aside from this regrettable television-network incident, I had a great weekend and hope you all did, too. What d'ya do??
~M. ;)
Posted by Marilyn Brant at 2:15 PM

You rant so politely and eloquently. At first I thought you were going to say they canceled Supernatural, the way they did Veronica Mars. (Can you tell I'm still not over that?)

Some of the writers from my local chapter got together on Saturday to brainstorm, write and eat chocolate. On Sunday, my husband and I hit the stores in preparation for the big storm. I think you're supposed to get slammed worse than we are. Take care!

LOL, Edie -- you have my sympathies for Veronica Mars. I know a few people who were heartbroken when it ended. I *love* hearing about your writing retreat -- that sounds like it was great fun!! As for the blizzard...ugh. Not looking forward to that here. You stay warm and cozy, too ;). xo

LOVE your CW rant. I'm glad you gave them an ear full. It's so annoying when networks hype an event they know the viewing public is waiting for and then pull a fast one--the old bait and switch, which should be grounds for some kind of FCC fine.

I hope you get your fix with the Supernatural brothers soon.

Once FOX chopped Firefly, I figured all network executives had serious issues and tried to give up my investment in any show because I knew my heart would be ripped out and thrown on the floor for their amusement. Sorry you got this treatment.

Oh, how I hate when that happens! I also hate when a favorite show airs on a completely different night for no apparent reason then returns to its regular time period, but uh, then I've missed some crucial character and story developments. Don't those network execs know how much I hate missing new episodes?

Your letter was excellent, Marilyn. And I miss Veronica Mars too!

Pamala, yes!! There should definitely be a fine -- I like your idea ;). If the network pushes the show back another week, I'll be forced to fly to CA and picket, LOL.

Pamela, Firefly...sigh. That cancellation did give me the excuse to buy the complete DVD set, however, so now I can ogle Nathan-as-Mal however often I want... There were A LOT of angry people about the whole thing, though. We weren't alone...

Robin, I know!! What IS it about the switching of nights? Don't these network people understand we make plans *around* our favorite shows? Grrrr!!

(I hope you CW execs are paying attention to our collective frustration here... :)